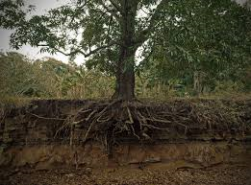 Sometimes I have a piss poor attitude. Don’t get me wrong, it’s justified. That doesn’t make it right. I am giving ownership of the afore mentioned attitude to Jesus. I have to. It’s toxic. I have been so stressed out over every little decision that my kids are making lately, that I literally have an ulcer. That is not abundant life. That’s BULL. And now, I  have to give credit where credit is due…Erin had such a timely word this week ! She said that the Lord had showed her that she was no longer the blossoms on the tree, but that she was the root system now…growing deep underground. As she spoke, I envisioned what she was saying…my mind could see and even smell the dark, rich soil where the roots are growing, and spreading through. It was beautiful and revealing. There is a season of flowering, but it gives way to a time of maturing, of standing strong. I have given my kids all my attention, all my heart, and now I have to trust that the Father is holding them. I don’t want to squeeze the life out of them, I want to hold on loosely. Now is the time for me to enjoy, my root system is in place….the sweet fragrance of the deep is all around….aaahhh.